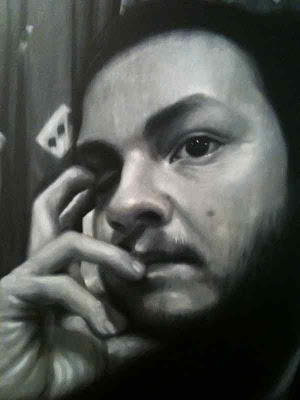 Well, here's a blog post I never thought I'd write. I'm sorry to tell you that my son died very suddenly and unexpectedly last Saturday. His final words to me were 'can you pass me the scissors?' as he wanted to open a packet of pasta for his lunch. Literally seconds later, he had a massive seizure and his heart stopped. The ambulance was there in a flash and a team of six fought to get his heart started again. We transferred to King's Hospital (who were brilliant) where they tried again but it was no good. They stopped resuscitation after an hour. His time of death was registered as 14.45 but I'm reasonably sure that he died at home. I think he wasn't in any pain. His sister, carer and I sat with him and I'm glad to tell you he looked very peaceful. His poor dad had to fly back from Thailand, where he'd been on business and saw him on Monday. The funeral's not for two weeks or so while they conduct post-mortem tests to confirm a seizure. Now I must away to tend to my family. If it seems like I'm coping, well, I am. Six months from now I'll be howling at the moon.
Posted by Elinor at 05:53

So very sorry to hear your news. Sending hugs. I hope that with time the memories will be a joy for you x

Really sad news. I guess we all have to cherish the memories of those we have lost, I hope you can do that with joy. x

Sorry for your loss. My thoughts are with you. Janice

My heart and healing wishes reaching out to you at this sad time.

i'm so so sorry Ellinor , i for one will miss his very funny statements and quotes xx

Thank you all very much indeed for your kind words. We are borne up.